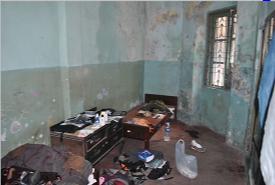 From a travel blogging couple named Lisa and Greg whose siteis funemployedtravelers.com –

Hotel Maria, Sudder Street, Kolkata, India. Rs250 ($5.43USD ) total 2ppl double bed w/private toilet. This place is hard to rate only because it was recommended by a lady we had met at the airport and it was in our Lonely Planet guide. To us, our room was a almost condemnable (only if the authorities could confirm there was mold). It smelled musty and moldy and the paint was chipping off the walls. The sheets were dirty, even after we asked them to change them again and the beds were hard. We actually put the 2 twin size mattresses on top of each other hoping for some extra padding, but there was no use. The pillows were hard and if you touched the pillow case for too long you would get an oily feeling on your hand. Yes, the dirt and oil from years of use actually seeped through the pillow and case. The wool blankets they gave us for warmth were also old and smelly. I am convinced that they had never been washed. In fact, there was a stain on  one of the blankets but we didn’t notice it until our last night there.  Needless to say we slept motionless in our sleep sheets to keep us safe from God knows what.  The bathroom had a Western toilet that had concrete built up around to make it a squat. That was tricky at first but you got use to the possibility of falling forward. Also, the toilet was broken so in order to flush you just poured water into the basin-just like a squat. Only cold water came out of the shower head but there was free hot water service out in the courtyard. All you had to do was grab your bucket and fill it up with hot water and then bring it back to your room. This, oddly, wasn’t bad and we got use to it quickly.  The hotel staff wasn’t overly friendly or rude, they just didn’t do much. If you asked for something it was done but not in great haste. They offered internet access for Rs15 an hour, which was nice. There were also balconies on the roof and 2nd floor that were a good place to hang out and meet some other travelers.
Rating Hotel Maria is difficult because although we hated our room and it sounded like, from others we have met, that most of the rooms on Sudder Street were also completely gross. It’s the price we paid and the area we chose, but there really wasn’t a better place to be for your first time in Kolkata. Additionally, this was our first time in India, let alone Kolkata, so we had nothing to compare to this room. Besides the room’s grotesqueness, there was 24hour security, free hot water (some places make you pay), 2 balconies to hang out on, and cheap internet a few steps from your door.